Across the globe, many governments gave their citizens the heads-up for the imminent start of  vaccination against COVID in November. Meanwhile, vaccine developers went on an 'effectiveness percentage' race, touting their own vaccine over others. It was a very close race because all vaccines showed about the same degree of effectiveness, and yet public opinion was inclined to favour some developers over others. How come?  We have looked into the matter and found out which pharma companies Russian doctors are more loyal to, and why.

When a pandemic is on, communication between doctors and pharma companies should be well established. Doctors expect the manufacturer to be able to convincingly show how their product is different from the competition's and why it should be the preferred therapy choice, and substantiate all this with a value-for-money rationale. The more full and outspoken the data provided, the more accessible the medicinal product will be to patients, the better the doctors and patients will feel about the medicinal product and the more the pharma company will earn.

The analytical office of GxP News teamed up with Medialogy and the professional community of Doctors of the Russian Federation to produce the first-ever ranking of Russian doctors' confidence in pharma companies.

The survey was conducted in two stages.  At stage one, we put our sample of companies together using Medialogy's Media-Index, which looks at how often the company is mentioned in the media: a higher index denotes a greater media presence.

The cut-off point for Russian companies, which generate more domestic media activity, was the index value of 7,000, compared to 3,000 for Big Pharma. This approach yielded matchable percents of Russian and international players.

At stage two, from 12 to 23 November, we surveyed the Doctors of the RF subscribers to canvass how they felt about different pharma companies.  Our survey sample numbered 731 doctors in 74 regions.  The aggregate response corpus was then rescaled to match the allocation of medical specialists in Russia, according to 2019 Rosstat statistics.

We found that the main reasons why doctors would trust some pharmaceutical companies but not others are: steady product quality (important for 64.2% of respondents), personal experience in using medicinal products (61.9%) and the manufacturer's openness, including clinical data publications (59%).

The same respondents were then asked to select three Russian or international companies they trust the most from the sample of companies drawn up at stage one.

The survey showed that loyalty to international manufacturers is significantly higher among Russian doctors: nearly 55% of our respondents found it difficult to name a single domestic company they trust, and only 9% were unable to name an international company.

The leaders among the Russian pharma companies were Pharmstandard Group (trusted by 20.8% of respondents), SRC VB Vector (17.1%) and the Saint Petersburg SRI of Vaccines and Serums (10.7%).  The other contenders gained below 10% of the votes.  The leader by a large margin among the international pharma companies was Pfizer with 71.1%.  The two nearest runners-up were Novartis with 49% and Gedeon Richter with 47.4%.

Here are the principal reasons why doctors would trust a pharmaceutical company: 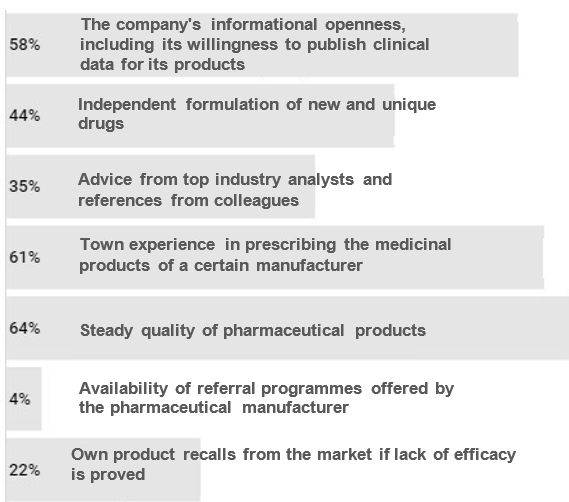 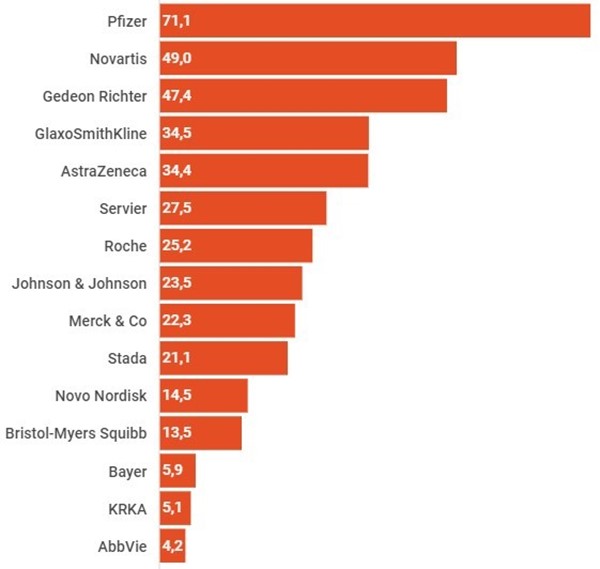 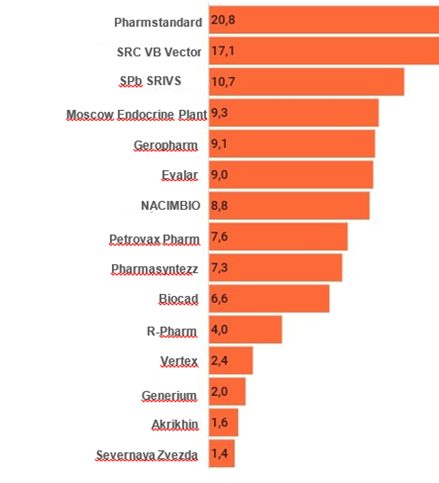 The survey was conducted among members of the Doctors of the Russian Federation community between 12 and 23 November.

The survey had 731 Russian doctors polled.  The survey covered all medical profiles in 74 regions of Russia.

The sample was rescaled using data on Russia's doctor allocation by medical profile (sourced from Rosstat).